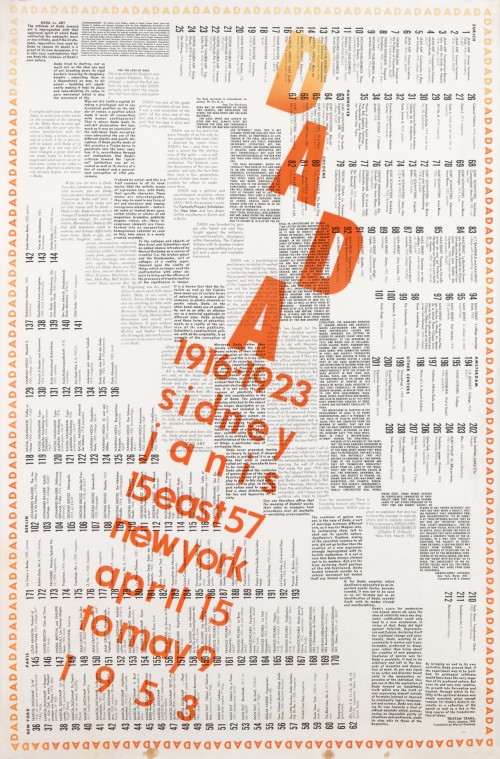 The Dada catalogue has all 212 works listed from the exhibition at Sidney Janis Gallery in New York, including 12 by Duchamp alongside those by Max Ernst, Kurt Schwitters, Jean Arp, Man Ray, and others organized by country. Staggered alongside are four concise essays by Hans Arp, Richard Huelsenbeck, Jacques-Henry Lévesque, and Tristan Tzara, with the name of the exhibition in semi-bold, reddish orange over the black letterpress text. The layout readily recalls the kinetic feel of Duchamp’s “Nude Descending a Staircase, No. 2″ (1912), but it has as much in common with his readymades that took an object and repositioned it as art (most famously with the “Fountain” urinal, one of which was replicated in the Janis show). As Caroll Janis wrote in Art in America in 2006, when the “painstakingly produced catalogue” was printed, Duchamp reportedly “took a sheet in his hands, crushed it into a loose ball, and suggested that a trash can full of these paper balls be offered to visitors entering the vernissage” (which, as usual, he didn’t attend). The Philadelphia Museum of Art has one of these crumpled versions in its collections, with the catalogue going from printed poster, to trash, to art just by the action and context.

Origen: The Dada Catalogue Marcel Duchamp Designed to Be Thrown Away